I am so easily distracted these days. So many projects, so little time! My usual approach to life is to streamline my projects so that I have two to three (at the most) major projects ongoing at the same time. These days, however, I am finishing a publishing project, working on two books simultaneously (not so uncommon for me – I write both nonfiction and fiction and do like to have one of each going on to balance off against one another), and I have a number of design/sewing-related projects that are edging ever closer to the front of my mind. I have plans to move forward with my fall-winter wardrobe blueprint, yet I find myself with a few left-overs from the summer to complete.

Recently I seem to be stuck on tops with waist definition (as I discussed in my last post), and have finished another one in a woven rayon fabric. (I picked up a Simplicity pattern when we were on our summer road trip in upstate New York. Can’t get them any longer in Canada.) 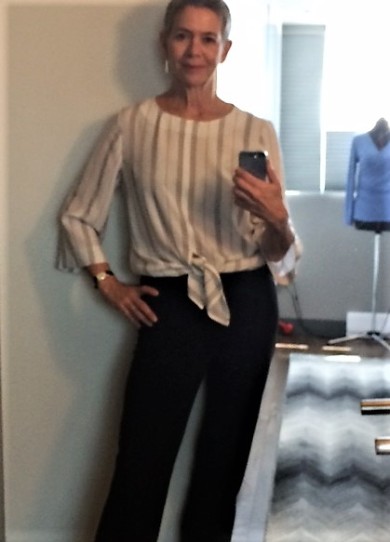 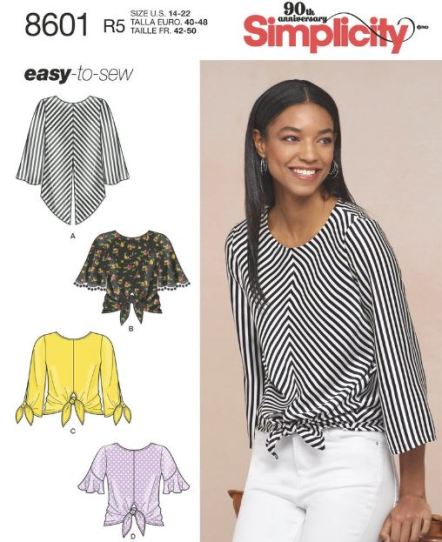 I do love how it drapes, and I will pick up some silk twill this fall (I hope when we visit New York) to add to that unfinished design board, and perhaps make it again. But, what about that neckline? I’ll have to do something about that.

It’s something of a “bleh” neckline, n’est ce pas? It’s more than a crew neck, but not quite that true bateau neckline that is my favourite.

Two summers ago, I spent months perfecting my “perfect boat-neck” T-shirt pattern. (This was before anyone had even an inkling that Meghan Markle would choose this neckline for her wedding dress.) It wasn’t that the T-shirt was a challenge: the challenges was getting that boat neck to be precisely the right width and depth for my personal fit and style preferences. Why, oh why, do I seem to be wanting to make everything with a boat neck these days? I thought it might be useful (and fun) to have a look at the history of this oh-so-appealing design feature. Then I’ll tell you why getting the pattern just right is a matter of both mathematics and squinting. Anyway…

Boat neck. Bateau neck. Sabrina neck. Are they all the same? Well, it seems that there are a few differences. (Well, bateau is French for boat in case you’re a bit French-challenged!) But it all officially started back in 1958 in France when the now ubiquitous white and navy striped shirt became an official part of a French sailor’s uniform.

Rumour has it that the stripes were supposed to make a man-overboard easier to see in the water. As time went on, the so-called French sailor shirt – or Breton shirt – became a wardrobe staple made even more famous by iconic American actress Jean Seberg who spent half her life in France, artist Pablo Picasso and the likes of Jean-Paul Gaultier.

Not to mention Jackie O. and Coco herself. But it was all about the stripes in the early days. What about that neckline? (Jackie’s boat necks helped it to move along past the stripes.) 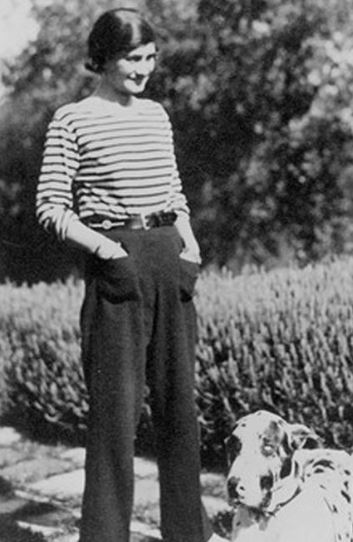 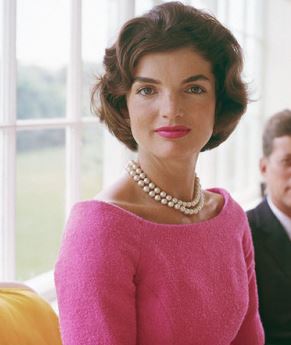 If you examine the original design on the French sailors closely, you can see that the neckline was widened slightly. When you see an homage to the Breton shirt on Jean Seberg above, you can see the allure of the widened neckline exposing much more of the collarbone.

Then, of course, there is my personal muse, Audrey Hepburn. According to legend, Audrey didn’t love her neck or décolletage. So, many of her necklines were high and wide, exposing just that touch of collar-bone that is so sexy on almost every woman. However, when she was doing the film Sabrina, the boat neckline came up even slightly higher, thus creating a new kind of boat neck now and for all eternity to be called the Sabrina neckline. It isn’t clear whether Givenchy (who designed many if not most of Hepburn’s film wardrobes) or Edith Head (personally my favourite costume designer) who actually designed it since they both worked on the film. [The Sabrina neckline, higher and straighter than the others is on Audrey in the upper left photo below. On the lower right photo of Jackie, hers is almost a Sabrina.] 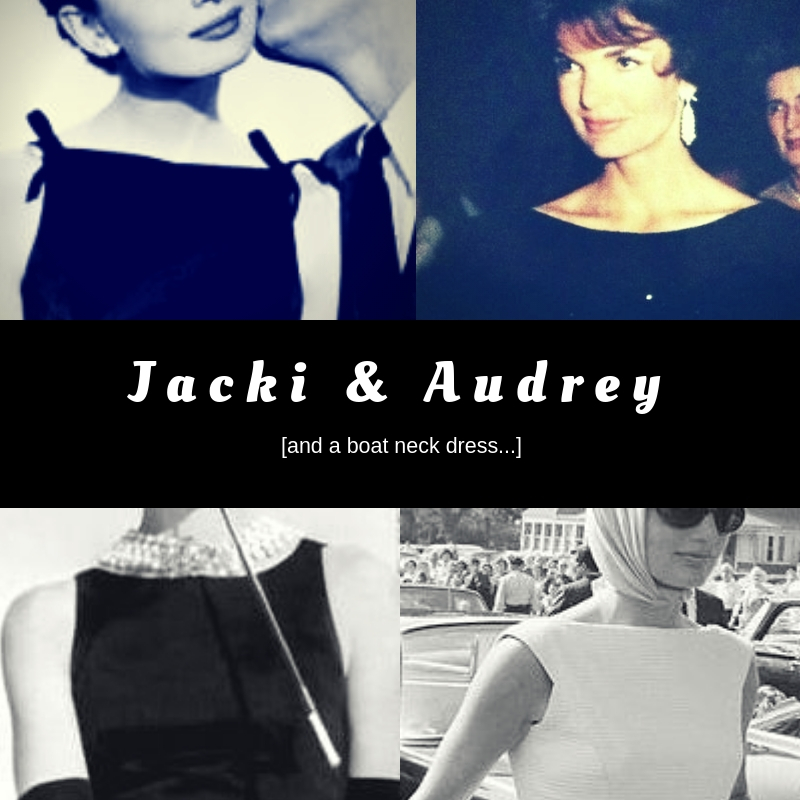 Anyway, stylish women have been picking it up ever since. *bats eyelashes*

I learned about drafting boat necks from the pattern-making course I took online from Suzy Furrer. What haunts me most about them ever since is trying to ensure that the back neckline is taken up just enough to ensure that the front of the neckline doesn’t gape. She has a rules she calls the “wide neckline adjustment rule.”

According to what I learned, if the front and back of the boat neck are the same measurement, the front will gape. And the truth is, I have noticed this on some of the ready-to-wear pieces I have picked up over the years. It’s usually a small bit of gaping, but gaping nonetheless. And if I am going to design and make my own pieces, they have to fit perfectly. So, I learn the rule.

Here is an example: 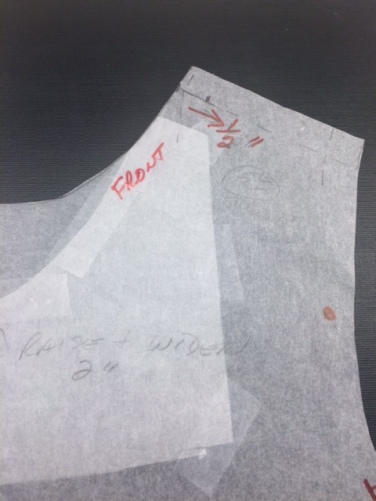 When I altered the original neckline of this pattern I made (I didn’t like the shape of depth of the original), I decided that it would be better if it were 1/2″ wider on each side in the front (I also brought it up 2″ but that doesn’t affect the shoulder adjustment). So, after I made this change on the front neckline, of course I had to true up the shoulder seam by making the back neckline 1/2″ wider as well giving me a 2 1/2″ shoulder seam which I like with a boat neck. But, as  you can see in the photo below, I also shortened the length of the back neck by 1/8″ by lowering the high neck point. 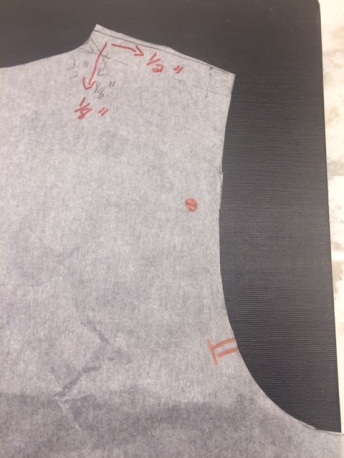 If I create a boat neck from my original sloper where the neckline is right at the high neck point, and I want my perfect boat neck which gives me that 2-2 1/2″ shoulder seam, I generally have to shorten the back by as much as 5/8″. In the case of the above example, the point I moved was already a distance from the high neck point (hope this makes sense!).

The point is that the farther out the neckline is from the high shoulder point, the shorter the back needs to be to prevent that gaping – up to about a maximum of 3/4″. Now, I always check these measurements on commercial patterns with boat necks, too. 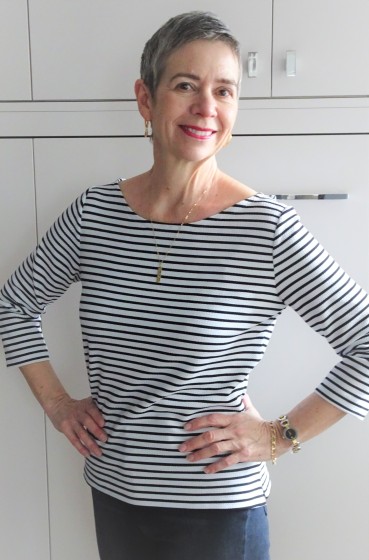 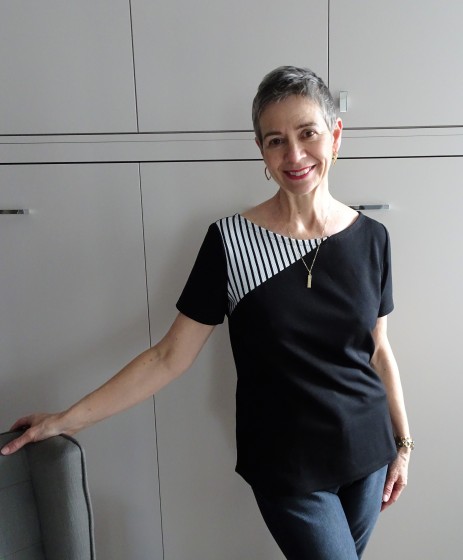 [Two of the designs from the GG Collection basics from last year when I was perfecting my perfect boat neck!]

As I doodle toward my fall designs, I’m noting that this neckline keeps popping up there too. Good thing it works in many fabrics in all seasons. So, now I’m back to my design board. Talk soon! 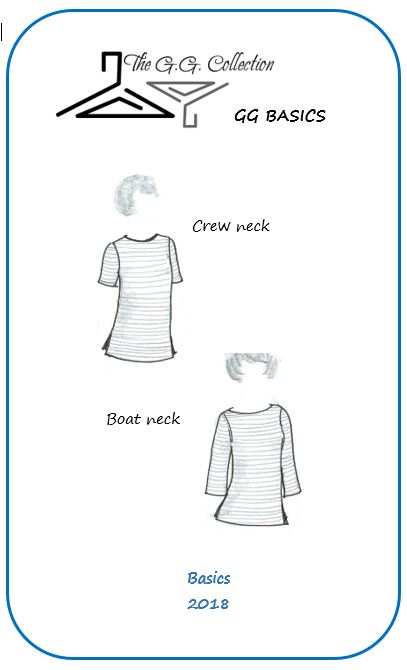 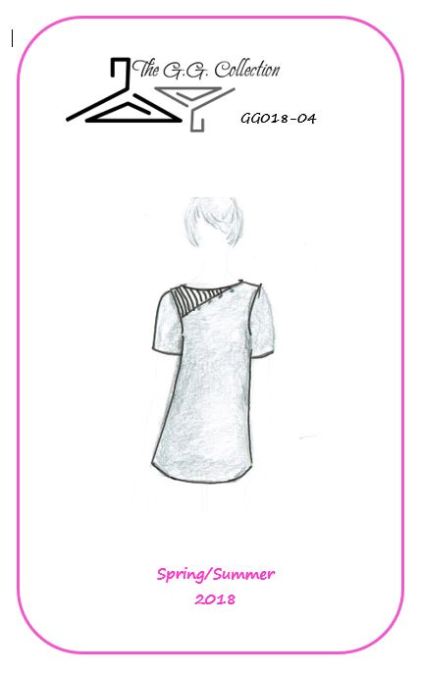 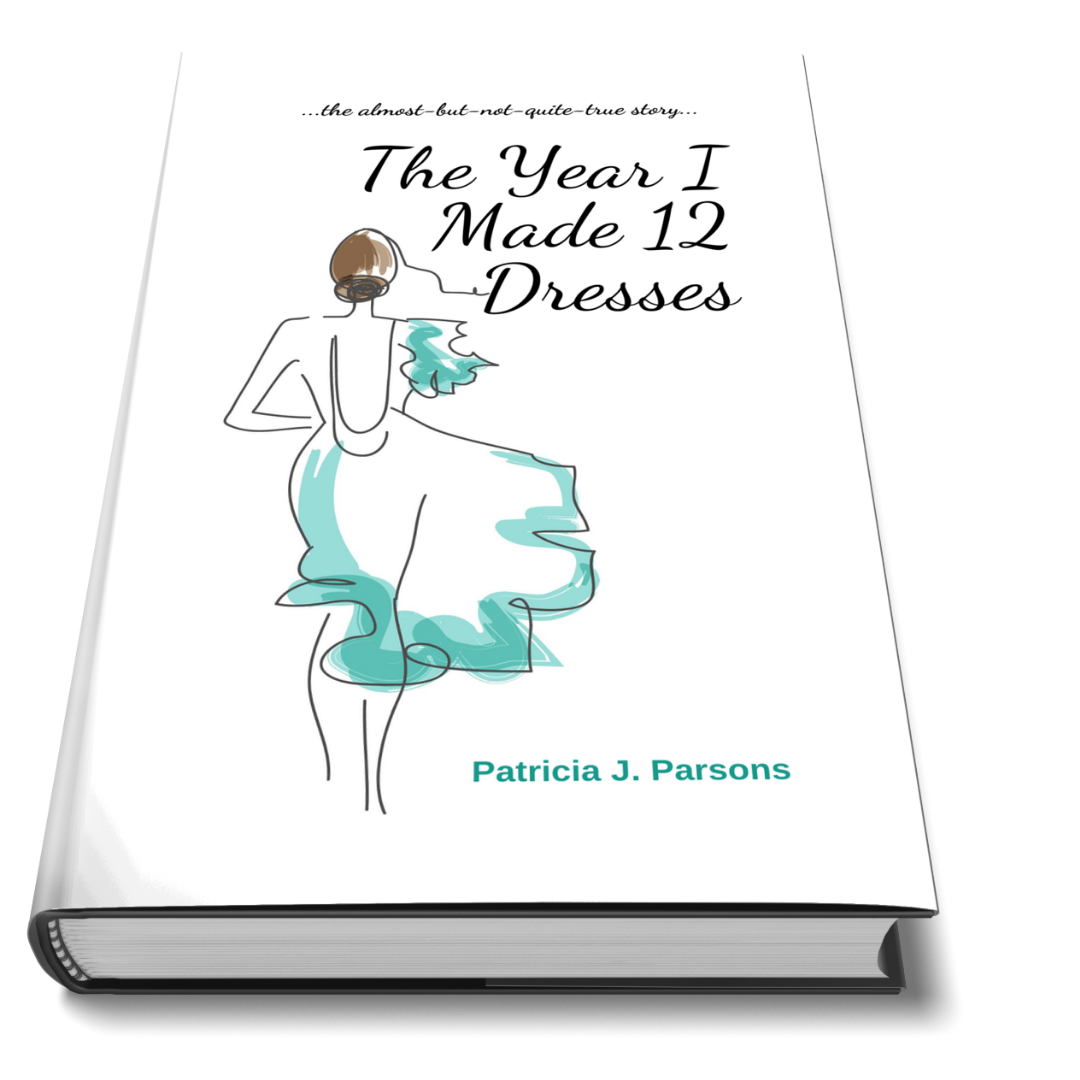