When I learned to sew – way back in the ‘olden’ days – the notion of making a muslin/toile/test garment never occurred to any of us in the ‘home ec’ classes of the day. In fact, the idea of taking the time to make a garment that you would never even wear (don’t get me started on the notion of a ‘wearable muslin’ – a rant for another day) was so foreign as to be laughable. These days, however, for my money, making a quality garment of quality fabric without a fitting muslin would be fool-hardy. For me, getting that fit right before laying out and cutting my fabric is key to the success of the project and my feeling of accomplishment. So, in the case of my current project, when last we talked, I had whipped together the toile and was just about to put it on. Moment of truth…

Dear god…it’s hideous. Every single complaint anyone had about this pattern played out before my eyes in the mirror. Despite the fact that I had done a tissue fit, I had not, of course, fit the sleeves. How problematic could they be? As it turns out – very problematic. And although the thing now fits around me relatively well, the shape was clearly wrong.

Reviews I had read of Vogue 8804, Clair Shaeffer’s LFJ pattern suggested that it was boxy, despite the picture on the pattern envelope, so I had nipped it in a bit. Not nearly enough. For me, the upper chest area was also billowy, but with princess seams, that’s always an easy fix for me and becomes the difference between the fit of an off-the-rack jacket and a custom-made one. First adjustment taken care of. 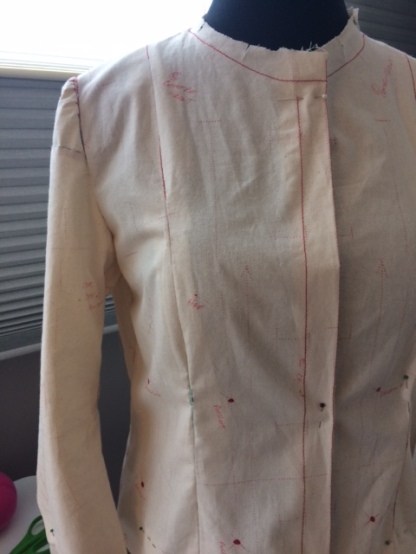 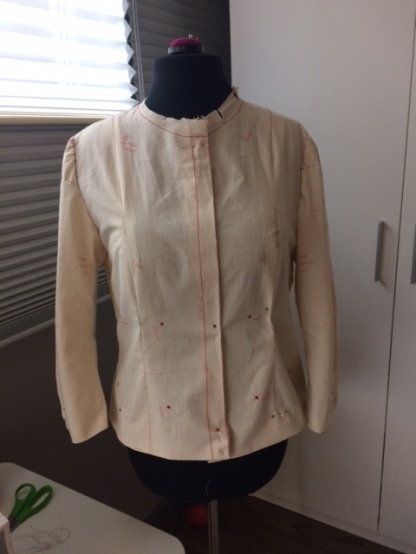 The sleeves are another problem. Given that one of the hallmarks of a Chanel-inspired jacket is the slimness of the sleeves, I’m left wondering just who CS and Vogue thought had arms this large. However, since they are three-piece sleeves, there are several different points of reduction available to me including that seam that runs from the shoulder point to the cuff. I also add a dead dart at the under arm which helps. But the sleeve head also seems too bit for the armscye at the front — too much fullness that will have to come out. Also, they are an odd length for me. They are designed to be bracelet length, and I thought that I’d like that. Turns out that the proportion is just wrong on me—it might work for someone else, but not me. So I decide to remove the sleeves, re-cut them and see how the second pass goes. 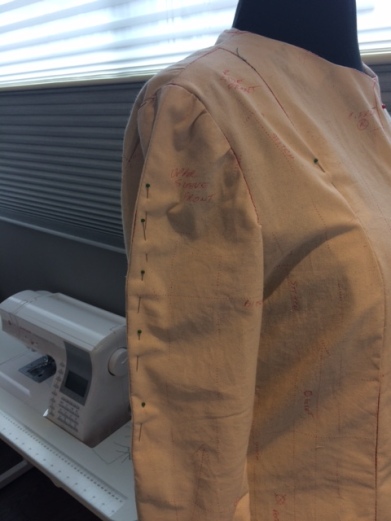 The bottom line at this point is that I need to do a second muslin.

I use the pieces of my first muslin with their extensive alterations as the pattern for muslin #2 and sew it up. When I look in the mirror, I see that it is better, but there are still some fit issues.

The sleeves now fit better and are a better length, but it’s still a bit boxy – the waist is too wide and needs to be nipped in at the front princess seams and a bit at the sides. There is also another issue.

When I first cut out the pattern, I did note that CS had used ease at the bust along with the princess seaming. The pattern directions then call for this to be converted to an underarm dart in the lining.

I had thought this would be a good idea, but now it’s just puffy. Of course the muslin fabric does not have the characteristics of fluidity that will be part of working with the bouclé, but I’m wondering if removing the ease with a dead dart will improve the fit. And…it does! 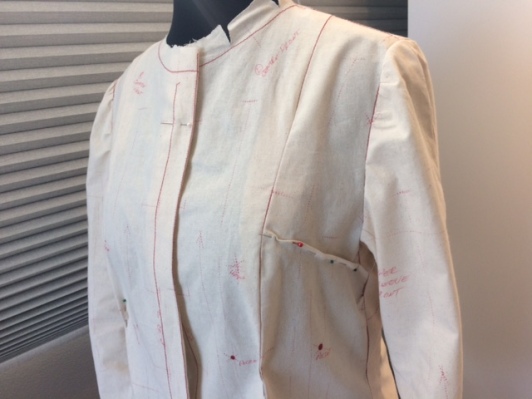 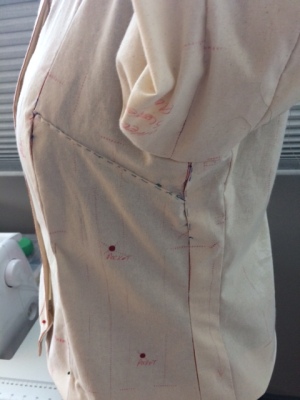 Then there is the length issue. I ignored it at the first muslin fitting, but now it’s of concern. It’s either not short enough, or not long enough. After consideration, I opt for the shorter length, then see that there is too much flair at the hemline. I lengthen it again to the original pattern length, and the flare only gets worse. So it’s back to the drawing board for the hem.

I take the hem down again, reduce the width of the side panels and shorten it again and it works. Now I need to evaluate the pocket placement.

This jacket has four pockets and when I examine their location on Chanel originals, I note that the placement varies a lot. So, I’m going to have to go with what works best for my body shape and height. I move them up and over, then back and find them too close to the centre line making them look asymmetrical. Back they go and now the muslin is ready.

Now it’s time to pick it apart, iron the pieces well and ensure that they are free from lint bits. I now have a pattern from muslin and it’s on to the exciting bit of cutting and marking real fabric! 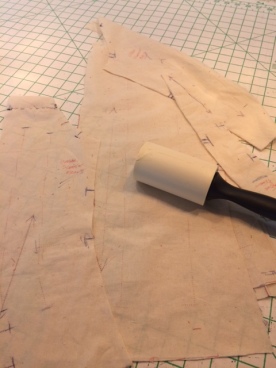 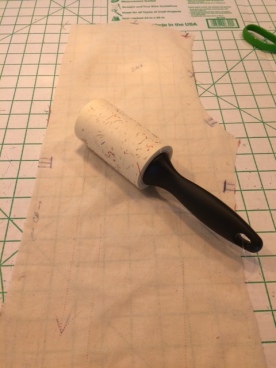 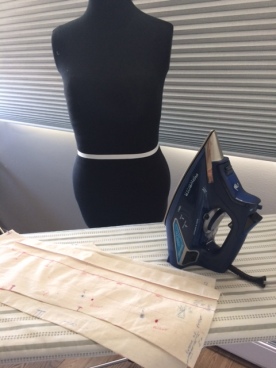 One thought on “My Little French Jacket #3: Muslin-fitting challenges”