I cannot wait to begin actually constructing my Little Black (French) Jacket that is an homage to Coco herself. But, in spite of all that I’ve accomplished already, and all the time I’ve spent to date, I’m still not there yet. Before I can take the fabric to the machine, I have to prepare it further by marking everything imaginable and stabilizing the edges.

Anyone who teaches sewing online or in the classroom it seems will tell you that one of the keys to a garment that fits and looks professional is ensuring that all relevant pattern markings are transferred somehow to the fashion fabric. In the case of the bouclé and silk charmeuse I’m using for this project I can only use silk thread – both tracing and tailor’s tacks.

I learned to make tailor’s tacks in home economics sewing classes when I was twelve years old. You run a double thread through the pattern and two layers of fabric leaving a tail and a loop. You then cut the loop and carefully peel apart the layers. Then you cut the thread between the layers leaving markings on both layers in exactly the same place. 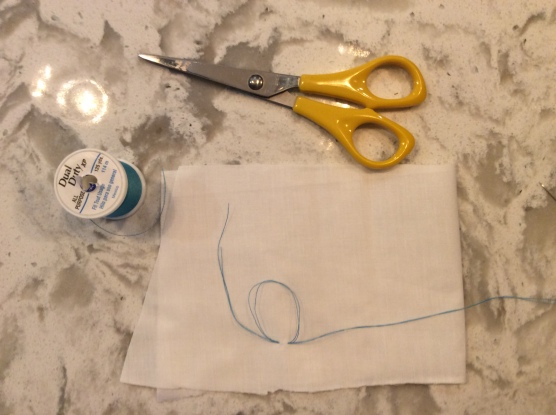 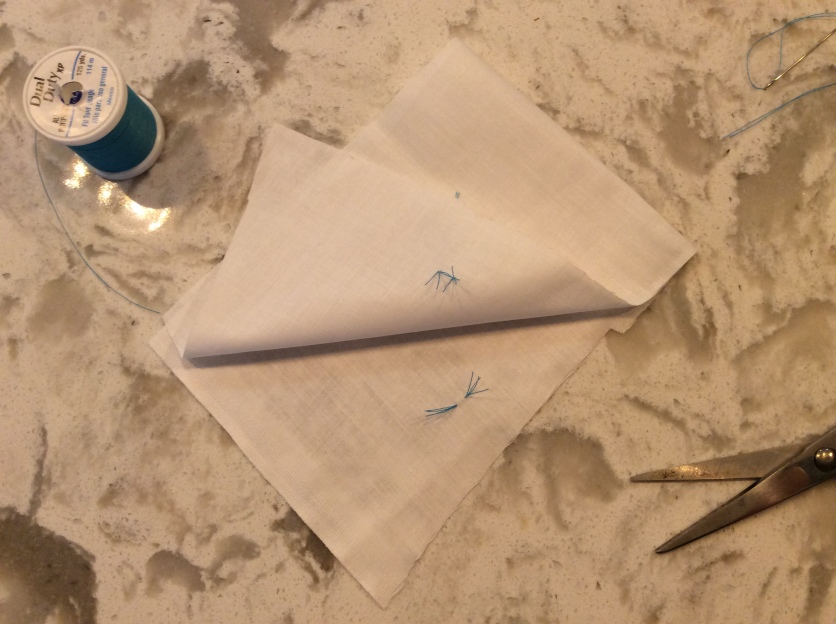 Unfortunately, with the bouclé, these loops continually slide out leaving me with no markings. So, I’m going to have to use my Craftsy instructor’s technique which involves a single thread through a single layer stabilized with a tiny, tight stitch.

In addition to all these tailor’s tacks which have to mark both the fabric and the silk charmeuse (from which all of the threads continually slide – I’m going to have to refer to the pattern as I sew, I think), I decide to thread trace most of the seam lines. Although this particular instructor doesn’t’ suggest this, others who teach this French jacket technique do, and it will ensure that I don’t lose my sewing line as the bouclé inevitably frays – which it does. I’m trying to handle it as little as possible to reduce this, but it goes along with this type of fabric.

Now it is time to stabilize. Most instructions for this type of jacket suggest using the selvage edges from silk organza. I had some difficulty finding some, and you need a whole lot to be able to cut enough selvage to run around the entire edge of the jacket – including the hem. So, I decide to use soft twill tape – not quite ‘kosher’ it seems, but I think it has a good feel. The stability at the edges shouldn’t be thick or hard, just enough to ensure that the trim has a foundation and the hem stays straight. So I begin.

I start with the centre front pieces, placing the twill on the jacket side of the seam allowance and pin-basting it in place, ensuring that the snips I make to fit it around the neck don’t go in too far, and that the corners are neatly and securely pinned.

Then, using tiny stitches with silk thread I sew the seam-line edge of the tape to the fabric. Then I use a herringbone stitch along the inner edge so that the tape will stay flat. I also decide to interface behind where the pocket will be attached. I cut some soft, fusible interfacing (not authentic since most couture garments do not have any ‘fusibles’ in them) to go just beyond where the pocket will be, cut it in two so that the piece on the centre front and the side front go on separately, then fuse it to the pieces. Voila! 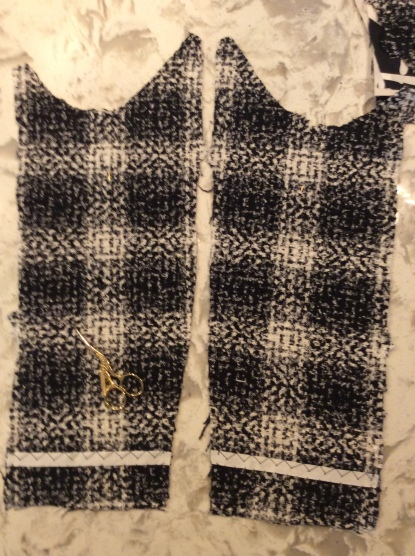 I then repeat the process with the back neck line, the hems of all the pieces and the hems of the arm pieces. It takes me quite a while, but when I’m finished, I love the thought that the under-pinnings of the jacket are so well thought out and put together. This is the work that is needed before I can begin putting the body pieces together and quilting that silk lining to the inside of the jacket à la Chanel! Lots of fun ahead!

Here is a link to a terrific Craftsy tutorial on making tailor’s tacks (they seem to use my own personal method!): http://www.craftsy.com/blog/2015/01/tailors-tacks-for-pattern-marking/

And another one that also uses the same method!: http://coatsandclarksewingsecrets.com/blogcategory/sewing/tailor-tack-tutorial-by-gertie-2

3 thoughts on “LBJ*: It’s What’s Underneath that Counts (Marking & Stabilizing)”